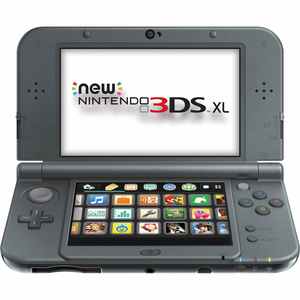 Handheld consoles, compared to full-blown consoles, may not have the same power as cutting-edge consoles or even ultra-powerful gaming personal computers and laptop. What it does have though, are equally impressive gaming options with the mind-blowing portability that many of us have definitely been hooked to. There have already been plenty of handheld consoles that have graced the gaming industry scene but, there are simply some that have been more iconic than others. One of which is the Nintendo 3D XL Console.

However, what we're referring to is not simply the Nintendo 3DS XL console as this particular one may not have been able to live to the hype. What has redeemed it's somewhat boggling result in the market, is the New Nintendo 3Ds Console. The name convention that has been displayed in the making of the New 3Ds console may be questionable as the "New" is part of the name of the console but, it's something that you could certainly get past through, given the fact that it definitely deserves its refreshing name.

The new 3Ds console is one of the best Nintendo consoles at dsigames.com today and many would surely be impressed with its witty improvements. It's an improvement to the Nintendo 3DS XL console which is pretty much something that you could have concluded already. Amazingly, it resulted in a more amazing and feature-packed console that lives up to the name while also coming in with even more advantages. Let's dive into what this console has to offer to players and see why this Nintendo 3DS 2018 should be next on your shopping list.

As expected from one of the biggest brands, Nintendo games online are huge and there are plenty of Nintendo 3D XL games out there, just waiting for you to play with. Not only are their numbers daunting - but the titles themselves are also those that will make you want to go and play immediately. There are Zelda titles, Monster Hunter, Super Smash Bros and many more, all within your grasp. With this kind of entertainment that you could bring with you all throughout the day, there's simply no way you wouldn't be satisfied with this console in this aspect.

Visually, the Nintendo 3DS really didn't change much when compared to its predecessor - the Nintendo 3DS XL. The size is nearly the same with a few millimetres differentiating the old from the new. The screen is not only visually the same size but also provides the same resolution. What's amazing, however, is its 3D features becoming more exquisite and impressive than ever.

The resolution of the game may be the same but, you'll find that it has noticeably improved as well when it comes to the crispness of the display and the brightness. Along with that, it utilizes a unique technology that tracks you and your vision, providing a highly engaging depth to your experience. You'll easily see that the display really provides a 3D experience, although some may find it rather wobbly sometimes. There's also the improved comfort in using the console and the more impressive buttons that will help you display your skills to the fullest.

It is also said that the performance of the New 3Ds console has also been vastly improved with its new processor. However, some may still not be able to notice that, especially with the abundance of new and old nintendo games out there that can be played with the old 3DS XL console as well. It is highly likely that the impact of the improvement in the performance of the console will only be able to take the limelight once Nintendo 3D XL Games exclusive to the New Console comes into the market.

Another impressive addition to the performance of the new 3Ds console that will surely satisfy players, is the fact that it is more playable now even on low-light conditions. Although the battery of the console didn't improve much and feel as though it's the same from its predecessor, the other advantages that the console provides definitely overshadows the minor setbacks it has.

To Buy Or Not To Buy?

As a gamer, having a handheld console that would allow you to play until your heart's content, will surely be something that you'll welcome into your daily regime. This is especially true with this amazing New 3DS console. It's definitely a big 'yes' for you to buy this new Nintendo 3DS XL as it will surely be worth your bucks. However, do keep in mind that it would be best that you look for cheap new Nintendo 3DS XL Consoles by scouring the online world for New 3DS XL Deals to make your purchase even more remarkable.